The starting point for the research presented here is Pfeiffer’s postulate that copper chloride crystallisation of a blood sample generates a ‘protein pattern’ which is supposed to contain the essential elements of the crystallisation picture that appears later. In the same way, when crystallising plant extracts, Engqvist interpreted a fine water-insoluble residue observed on the surface of the glass, after washing off the crystals, as the ‘protein pattern’, showing a representation of the crystallisation picture. In the present study preliminary experiments to demonstrate protein-containing compounds with simple staining techniques (Fuchsin S) did not produce the expected results at first. However, surprisingly, they did show the presence of three different crystal types in the copper chloride crystallisation pictures, when applying plant extracts and gelatin as additives: (a) primary crystals in the form of needles that are readily water-soluble and stained by Fuchsin S; (b) secondary crystals present with a 50–80% coverage of the area of the glass plate with primary needles; these are insoluble in water and are not stained by Fuchsin S; they are present as largely opaque, very small and thin-layered crystal patterns which appear along the edges of the primary crystal needles at their contact zone with the glass surface; (c) tertiary crystals, so-called fine structures, mostly in a non-linear form, which appear in the last phase of the crystallisation; they are not soluble in water and are not stained by Fuchsin S. In order to examine the chemical and crystallographic nature of the three crystal types, experiments were carried out using scanning electron microscopy, X-ray diffraction analysis and X-ray fluorescence analysis. These showed that the primary crystals were completely identical to the original substance copper (II) chloride dihydrate (CuCl2∙2H2O). As opposed to these the secondary and tertiary crystals comprised water insoluble basic copper chloride compounds, for the most part identifiable as atacamite (2CuCl2∙5Cu(OH)2∙2H2O) with smaller amounts of anthonite (Cu(OH,Cl)∙2H2O). It is not yet possible to give the exact reasons for these changes. Thus in our experiments we were not able to find any evidence of a ‘protein pattern’ (Vorbild), based on crystallisation of copper chloride with plant extracts or gelatin as additives. On the other hand, during crystallisation a ‘negative picture’ of the actual crystallisation picture arises through the separation of water insoluble secondary and tertiary crystals. We call this the ‘copper chloride after-image’ (Nachbild). 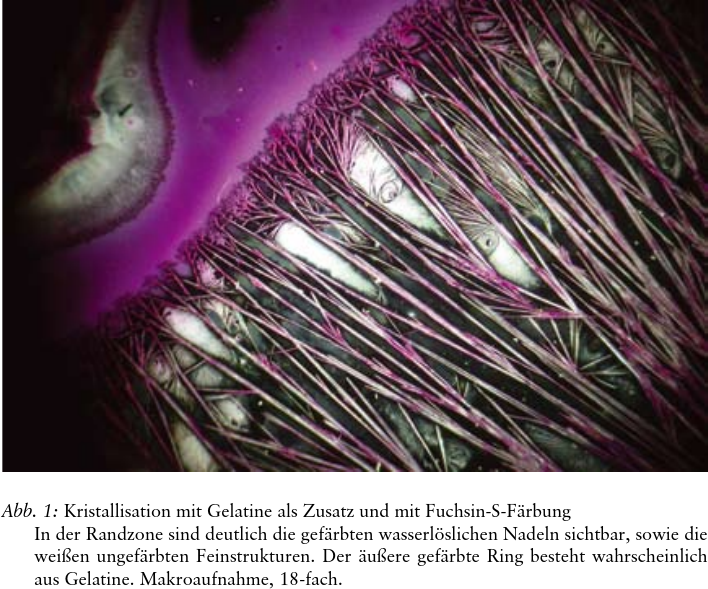 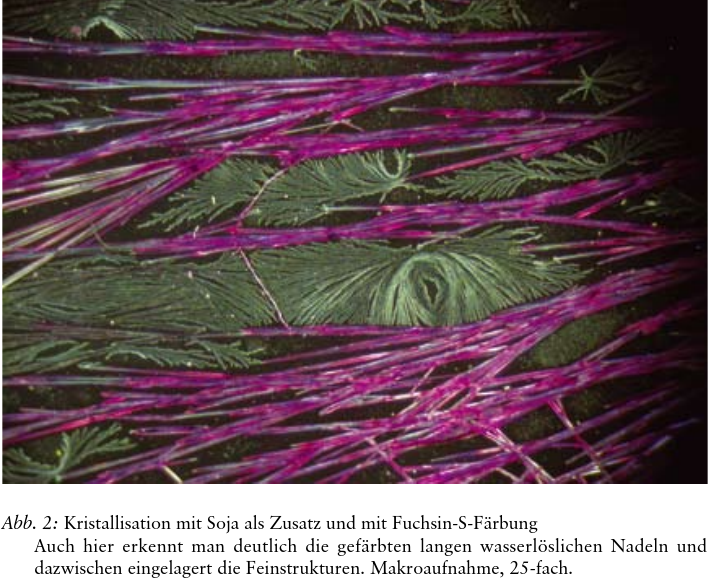 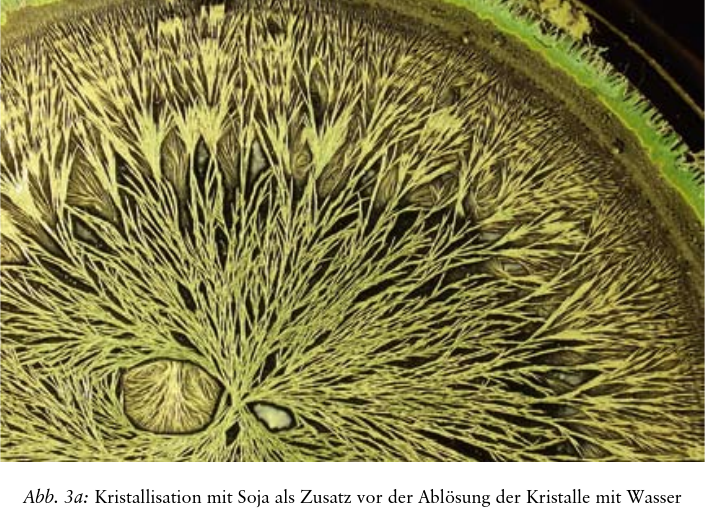 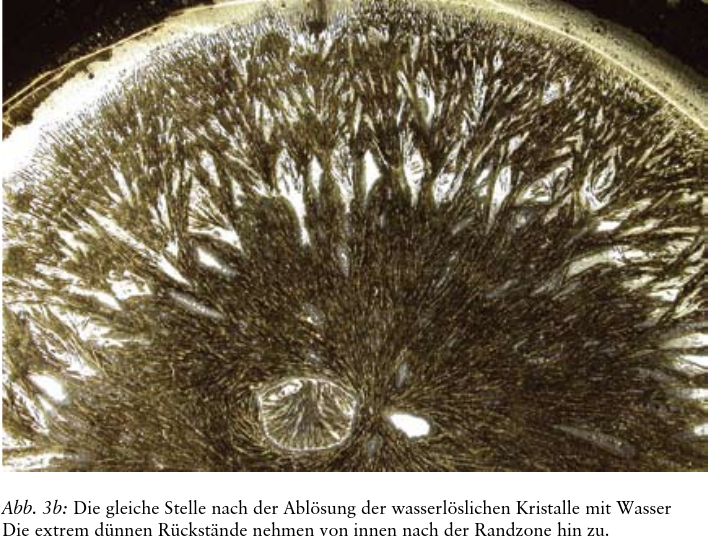 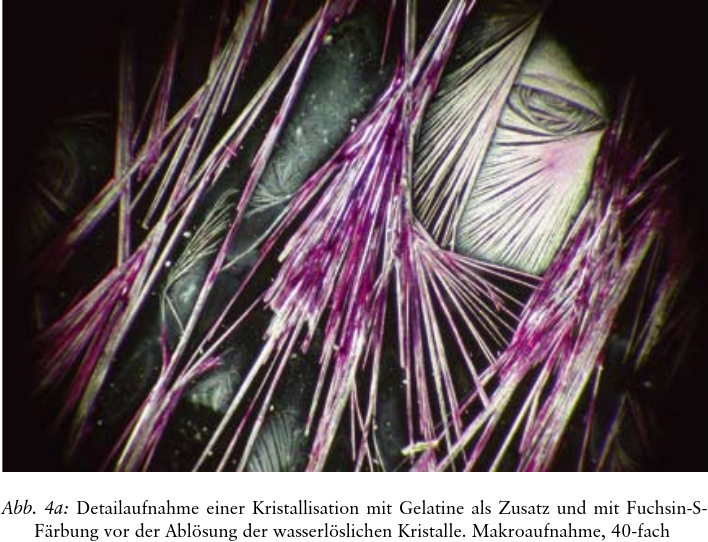 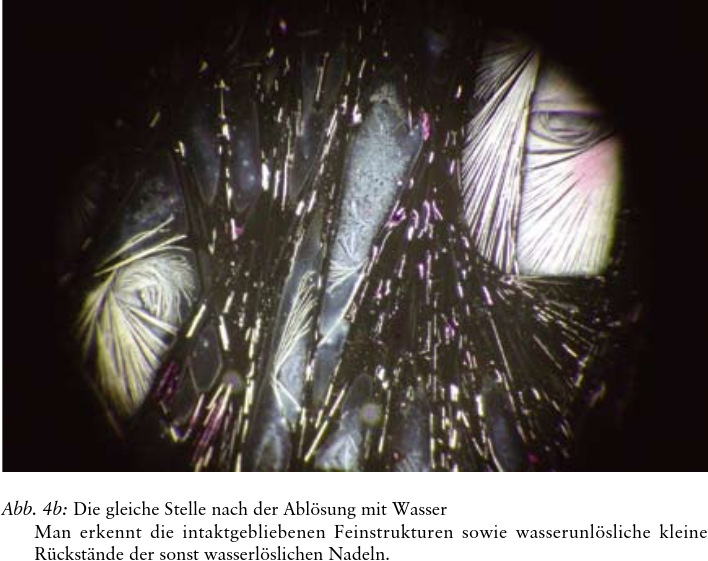 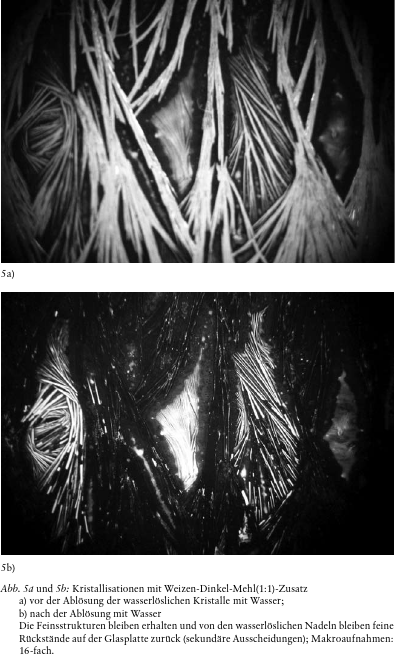 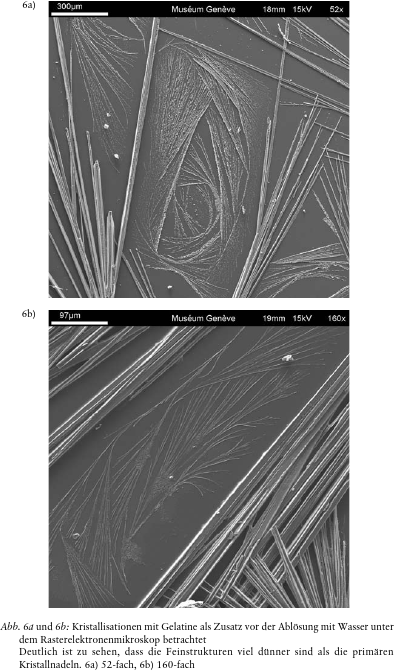 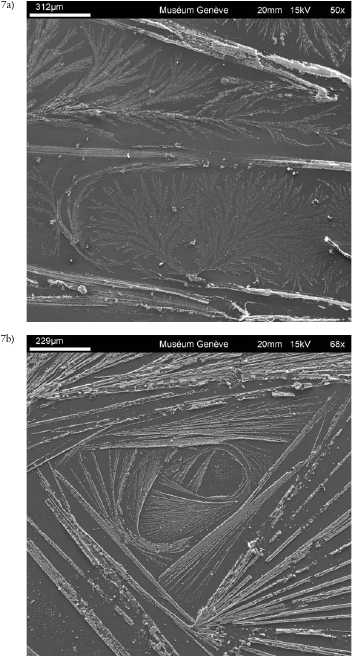 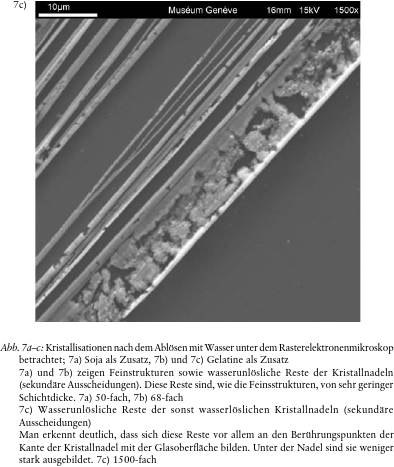 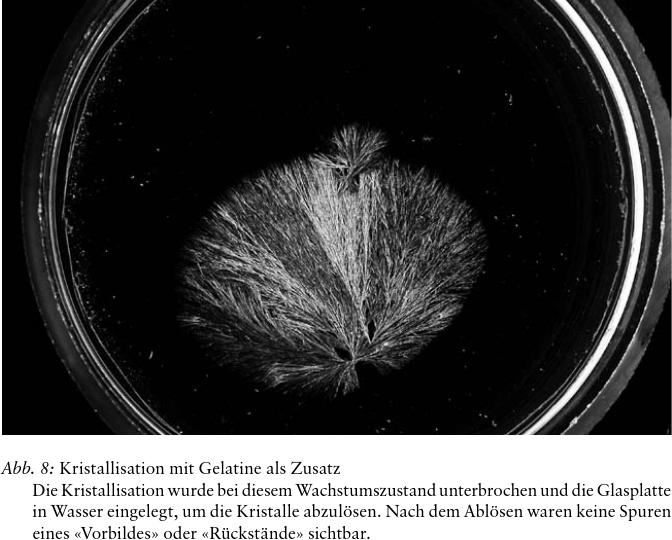 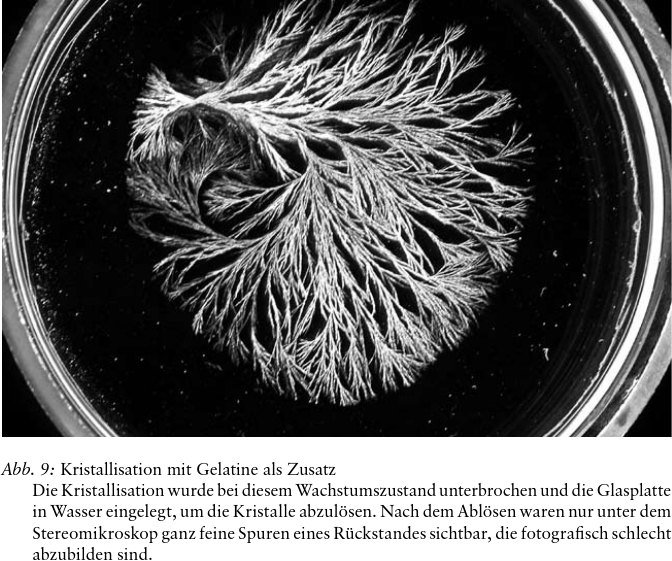 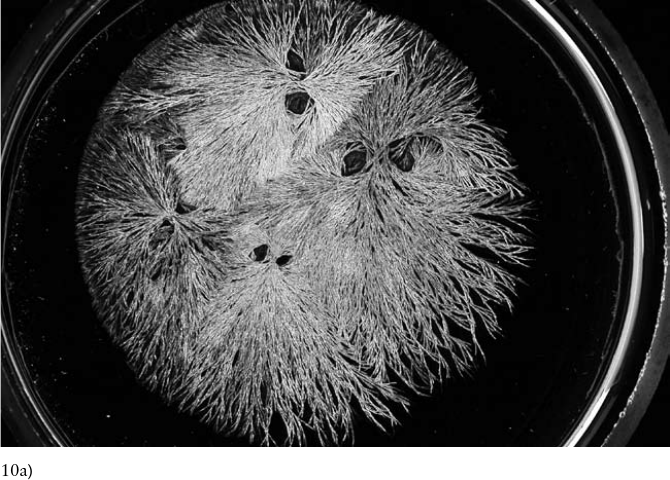 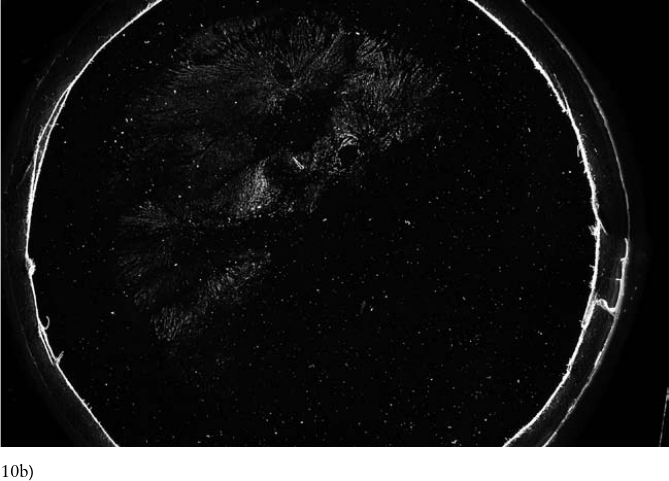 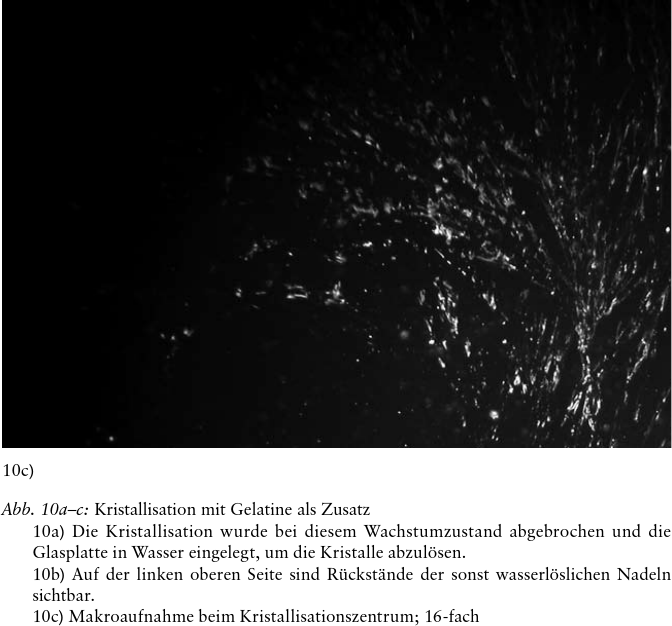 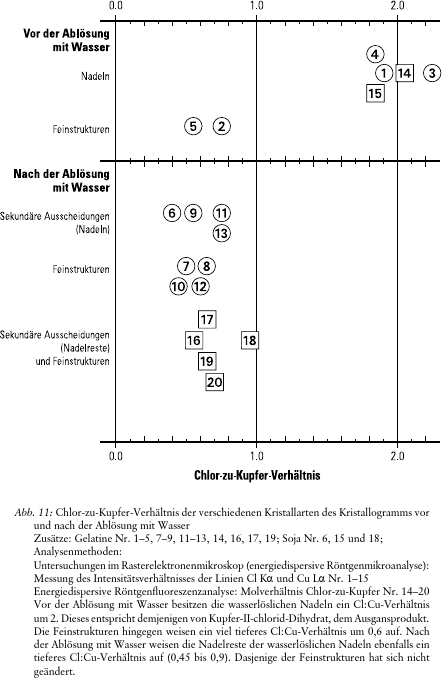 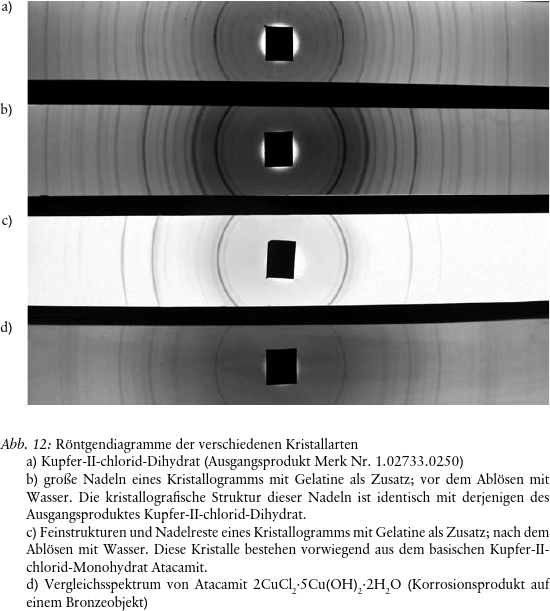