2. The method is described. For the evaluation attention was focussed on the morphology of the plants; measurement and statistical processing of the data were intended to support visual assessments.

3. When wheat was grown in nutrient solutions of varying composition and concentrations two characteristic types of root and shoot growth and transitions between these, were noticeable, including corresponding ratios between the lengths of roots and shoots. The “horizontal” type is induced by high macronutrient levels. Raised calcium and nitrogen levels were found to be major agents in inducing this development. The “vertical” type is induced by lower levels, or by adding trace elements and ferric citrate. The “vertical” type shows also an increase in uniformity between individual plants for the length of any of the initial seminal roots.

4. In interplay with the influence of the nutrient solutions and the cultivars grown, preparation 507 (valerian) induces the vertical type. The effect of the 507 on inducing a more vertical type constantly increased as the control groups became more horizontal. A linear correlation exists between the leaf 1: root 1 ratios induced by the control and the corresponding ratios induced by the 507.

5. Preparation 505 (oak bark) induces the “horizontal” type of root growth. In combination 505 and 507 produce transitional forms, however in a dynamic interplay: oak bark appears to antagonize the valerian effect in two ways: by inhibiting it if it was intense or by stimulating it if it was naturally low.

6. Preparation 503 (camomile) also in combination with 507 seems to increase the lengths of roots. Preliminary results are reported. Preparation 500 (hornmanure) increased root length. In spite of having undergone fermentation slurry (20°/0 cow manure in water) induced the horizontal type. Preparations alleviate this effect. Compost stimulates both types of growth, at any case opposite to the tendency that is induced by the nutrient solution.

7. Aspects of a rationale of these findings are discussed. 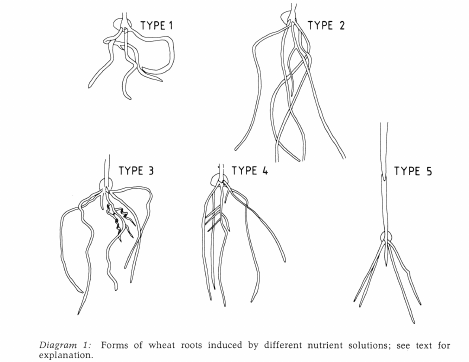 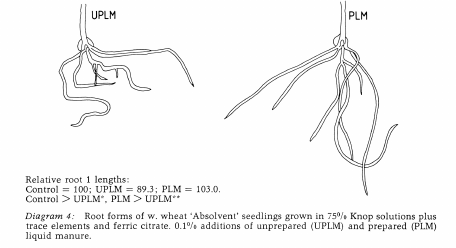